The FREE crochet pattern for this “Around the Bases” afghan pattern would be a wonderful one to start your New Year with!

This afghan, rather than having individual squares or being worked row by row, is instead worked up starting in the middle and working in square “rounds” (rows) until you get to the outside edge of the afghan.

This crochet project is the ultimate stitch sampler that was originally created as a crochet-along, giving you a wide variety of different stitches/patterns to crochet, a different one with each “row” in fact, so you probably won’t even get bored with this one. I have found that with repetitive crochet patterns, I tend to become bored of doing the same thing over and over and over again, but with this one that just doesn’t happen.

The pattern (link below) includes 16 separate links, neatly laid out one after the other, that guide you thoroughly through each “round” of this afghan. Do know, however, that some of the links consist of more than one row, so there are actually more than 16 rows needed to complete this pattern. This would be a great ongoing project to start early in the New Year!

If you decide you want a larger afghan than the one that the 16 rounds provides, you could simply add on the rows that were your favorites to end up with a larger afghan. Make this pattern a part of your New Year’s, and happy crocheting!

Here is part 1 of the pattern

Here is the pattern

Brought to you by Annie’s 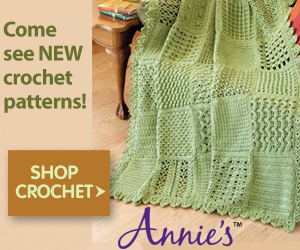 As an Amazon Associate, I earn from qualifying purchases.

Menu
Scroll back to top

We use cookies on this site to optimize functionality and give you the best possible experience. By using this site, you accept our use of cookies. Learn more